Background
Kazuya roamed on earth for an unknown amount of time already. Noone knows much about him or his background.

At one point in his past, his brother Atarashi left the place where they used to live for unknown reasons. On his search for him, Kazuya wandered through many places. At one place he met the fire spirit Logyrr who ended up coming with him and who is the only one Kazuya actually talks to.
Personality
Kazuya has a strange personality. He's a calm one, keeping his thoughts mostly to himself. Due to his life experience he judges situations and characters differently than others might do. Instead of interfering he'll often watch silently and use the information he got in future situations. "Calm waters are deep" is probably what describes this character best.
Abilities
Appearance 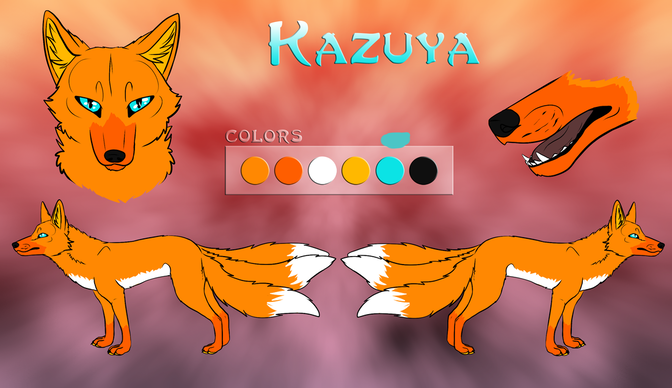 Kazuya is a tree-tailed orange fox with darker muzzle and legs and white belly and tail tips. His eyes are light blue.
Relationships
Logyrr
-
Quotes
“...” - to ..., Episode .
Trivia